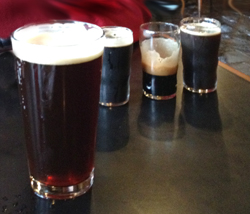 Yesterday I spent a rainy afternoon with someone I barely know in a local brewery. Through the marvelous connectivity of the internet (who says social media is isolating or artificial?), I met Greg Richardson, aka the Strategic Monk to learn a little more about brewing beer. He claims monasteries used to brew their own beer as a means of support. I have no idea if that’s true, knowing absolutely nothing about beer, or monasteries for that matter. He also claims beer goes back further than wine, which is pretty old considering wine is talked about a lot in the Bible.

I met Greg at a Tweet-up after the Sticky Teams conference. FYI: a “tweet-up” is when people who have only conversed via Twitter actually meet in person at a designated location. Dawn Carter, a sort of social media hub who connects people she meets to each other, introduced me to Greg. They were both very excited about something I’d never heard of: beer tasting.

I grew up Baptist in the Bible Belt, and we just never had alcohol around the house. So I was well into my adult years before I learned some of the major distinctions of wine (red grapes=red wine, white grapes=white wine…who knew?) Little by little I learned about notes and undertones and finishes. Turns out it’s much the same with beer. I tried a really dark beer with a chocolaty flavor. It was delish.

Greg is currently conducting research for his 2012 Craft Brewery Pilgrimage. You can join him in his research – drink some unusual beer, meet some interesting people – a great way to spend an afternoon.

One thought on “crafting connection”